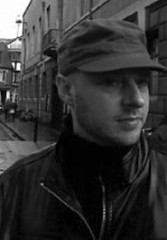 1) Where did the idea for Black Herald Press originate and what is the significance of the name?

To begin with, we had the idea to self-publish two of our own works, to be for once in full control of our own editing and production. But then while in this process and through speaking with friends who have their own publishing houses here in Paris, we decided to push the project further by publishing our own literary magazine and also future individual works of originality that we feel attracted to; hence the birth of Black Herald Press.

The title of the press is significant only in that it is taken from Los Heraldos Negros / Black Heralds, the first collection by the Peruvian poet César Vallejo, an important figure and influence. Beyond that, the word ‘Herald’ suggests a birth and/or declaration of something new and formidable that is close to announcement. Also we wanted a name that very few people would forget, and this seemed perfect.

2) The emphasis of Black Herald, your own poetry and the writing of your Black Herald co-editor, the poet, writer and translator Blandine Longre, tends to focus on, for want of a better less-reductive term, “visionary” poetry (your website bears a masthead by William Blake which is a hint). It’s a tradition that’s been largely buried in Britain but embraced in Europe, do you see Black Herald as being part of this lineage? And, if so, who would you see as being influences?

The title came first then, by chance, the Blake image, but we knew at once that when put side by side they possessed a powerful and symbiotic connection. I am not sure a ‘tradition’ of anything you could call visionary poetry has ever really existed in England, though of course there were and still are poets (outside of any movement or school) who could be described as possessing the faculties of a visionary power. At The Black Herald, the only ‘lineage’ we really want to pursue and be a part of is poetry that pushes the boundaries of what language can and cannot do...

(“I will not fall. I have reached the centre. I listen to the striking of who knows what divine clock through the thin carnal wall of a life full of blood, shudderings and breathings. I am near the mysterious core of things as one is sometimes, at night, near a heart.”)